Thousands in #Ranchi ran to end violence against women. How are you ending the #Farq? http://bit.ly/1OtvR6C

Have you asked #WhyTheFarq yet? People across the country are asking it. Find out more. http://bit.ly/1OtvR6C

Oxfam India in association with Jumao Manch organised a state-level run in Ranchi, Jharkhand as part of the 16 days of activism campaign.

Thousands of men, women and youth from 24 districts of Jharkhand participated in the four kilometre run which started from Purulia road to Albert Ekka Chowk in Ranchiand back. 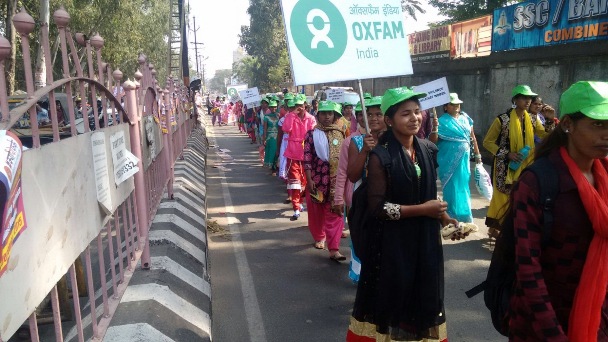 Speaking at the event, Marandi said: “The need of the hour is building mass awareness amongst women and girls on policies for women, especially on laws that prevent violence against women.”

Meena informed during the event that they established 22 women-run police stations in the state so far and launched a ‘Mahila helpline number’ for quick grievance redressal.

Everyday more and more women are afraid to go out of their homes because they fear violence and harassment.

But as a society we have learned to live with this fear. This needs to change now.

And to make things worse, we impose social attitudes, behaviours and practices (social norms) on women to accelerate gender inequality.

By signing a pledge, you are acknowledging the need for all of us to come together and tackle the extreme gender inequality currently impacting our society.

Together we must stand together to create a society where women and girls are valued and treated at par with men and boys.

This year for 16 days of activism for ending violence against women, join us and challenge these attitudes.