Continuing on the previous piece on Gita’s story (hyperlink to earlier blog) to realise her dreams to access quality education, let’s look at government’s priority towards education which is now also a legal entitlement for all children between 6 and 14 years.

To begin with, the Act (made operational through the government scheme Sarva Shiksha Abhiyan and henceforth called SSA) has been cash-strapped from the time of implementation. As per the government’s own estimations1 , SSA was to be provided with more funds than what was allocated to it.

For instance, starting 2012, the government proposed spending about Rs.38,545crore annually for three years to ensure the Act gets the bare minimum support needed to ensure implementation. Subsequent budgets of the Union government revealed significant shortfalls in this regard; the gap has been as high as Rs.14,500crore every year since 2012.

The gradual but certain decline in allocations is evident from the following graph that depicts government outlays on SSA and Mid Day Meal (MDM) scheme. 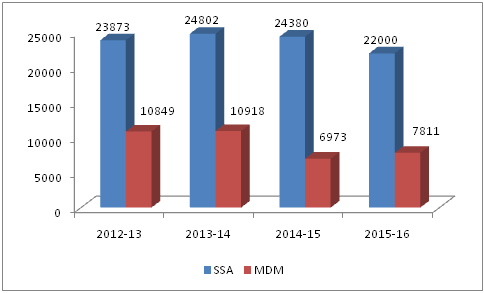 Note: All figures in Rs. crore

As mentioned earlier, a second layer of complexity is added when we realize that there are other types of schools that are well-funded and favoured. Take the case of Kendriya Vidyalayas in the country – these schools cater to the children of central government employees and were set up to provide quality schooling to wards of government employees transferred frequently across the country.

A back-of-the-envelope calculation reveals that the government spending on a child in Kendriya Vidyalaya is about Rs.27,000 while a rough estimation of spending on a child enrolled in an ordinary government school works out to a mere Rs.13002. Such a stark difference in provisioning would necessarily imply significant differences in quality of schooling. That would also explain why Gita would always be at a disadvantage as opposed to some other child who belongs to an economically better-off household.

Globally too, at this point in time, countries are discussing how much money would be needed to ensure basic rights to all people as part of the next set of global goals that would succeed the Millennium Development Goals (MDGs). The basic rights include healthcare, education, and nutrition to name a few.

MDGs were a set of eight global development goals agreed by countries in 2000 to be achieved by 2015. A new set of global goals, also known as Sustainable Development Goals (or SDGs) will be agreed in 2015 with a time frame of 15 years. Estimates suggest that $42 billion would be needed to achieve universal primary education and expand access to lower secondary education.3

Oxfam India along with other active NGOs and networks have launched a campaign HaqBantaHai (i.e. it is my right) to demand quality education for all children. One of the key asks of the campaign is adequate government spending to realize the Right to Education (RTE) Act.

Half a century ago, a government commission had sought to step up government spending on education to about 6% of the country’s Gross Domestic Product (GDP) to ensure quality schooling for all children. Even today, we are nowhere near this goal; total government spending on education hovers at 3.4% of the GDP. Sign the petition here and demand for the due share for all Gitas and Brijkishores and make your voice count.

Mohammed Moin had been in Delhi for a long time. He owned a tea stall and earned a monthly profit of about Rs 10000. Since the lockdown, which began on March 25, he hadn’t been able to set shop.

Navigating social media has been grim these last two months.

My colleague from the Bengaluru office, Mallika, called to double check if we were documenting the ‘FPO’ story for our weekly update. FPO is the short for Farmer Producer Organisation.

The kitchen on the Odisha-AP border in Ganjam district was up and running early today morning. On the menu was vegetable biryani, chole with lemon and onion.