The Eastern Indian state of Manipur was hit by an earthquake that measured 6.7 on the Richter scale at around 4:00 a.m. on January 4, 2016. The epicentre was Noney in the Tamenglong district. Eight people have reportedly died, and as many as 106 have been critically injured. Search-and-rescue operations are being conducted, and NDRF personnel have been deployed to the affected area. 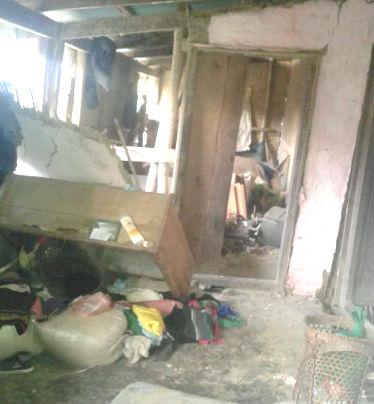 Local authorities are addressing the crisis and the impact of the damage is high. Photo credit: Kinshaba Riamroi/Oxfam.

The North-East region of India is considered the sixth major earthquake-prone belt in the world. Oxfam is assessing the Manipur earthquake situation. A two-member team is on-ground in the affected zone, coordinating with local partners and authorities to gather more information about the situation. Emerging concerns may include the need for shelter, winter clothing, kitchen utensils, hygiene items and access to safe water. Medical officers are monitoring the risk of disease outbreak.

A relief camp has been set up by the government in Noney, the epicentre, and a central medical team comprising orthopaedics, surgeons, anaesthesiologists and other technicians has also been deputed to Manipur to assist with the treatment of injured people.

339 buildings in the state have been damaged, such as this one in the state capital, Imphal. . Photo credit: Kinshaba Riamroi/Oxfam.

The impact of the damage is to be high and emergency shelters may be required due to loss of housing and basic shelter in the peak of winter. Most of the affected areas are built-up urban locations such as Imphal, the state capital, where a newly-built six storey building has collapsed.  One bridge and a total of 339 buildings in the state have suffered damage.

Several buildings in Silchar in the neighbouring state of Assam were damaged by the tremors.